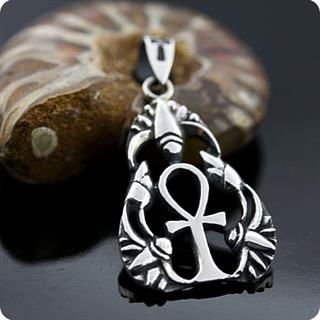 The Lotus flower is sacred to several traditions. Its long stem connects the lovely flower with its roots deep below the water, and is thus seen as an emblem of many deities who travel between the worlds. The Egyptians considered the lotus to be sacred and the flower was used as an offering to the gods. At night the flower closes and sinks underwater, to rise again the next day. It was thus seen as a symbol of the sun, creation and rebirth.

The Ankh is an ancient Egyptian symbol of Eternal Life, and is thought to symbolize the joining of the masculine and feminine principal. In Egyptian art, especially that depicting the afterlife, their gods and goddesses are shown holding the Ankh by its loop as if it were a key. It is believed that this symbolically shows the Ankh would open the gates of death on to immortality. It is also known as the Key of the Nile, representing the union of Isis and Osiris.