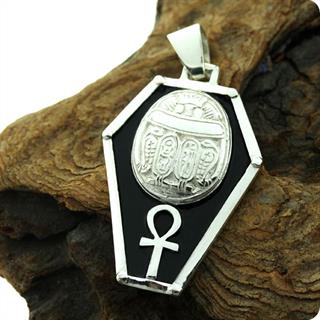 Scarab kheper
The particular species of beetle represented in the numerous ancient Egyptian amulets and works of art was commonly the large sacred  (Scarabaeus sacer). This beetle was famous for his habit of rolling balls of dung along the ground and depositing them in its burrows. The female would lay her eggs in the ball of dung. When they hatched, the larvae would use the ball for food. When the dung was consumed the young beetles would emerge from the hole.

Millions of amulets and stamp seals of stone or faience were fashioned in Egypt depicted the scarab beetle.

It seemed to the ancient Egyptians that the young scarab beetles emerged spontaneously from the burrow were they were born. Therefore they were worshipped as "Khepera", which means "he was came forth." This creative aspect of the scarab was associated with the creator god Atum.