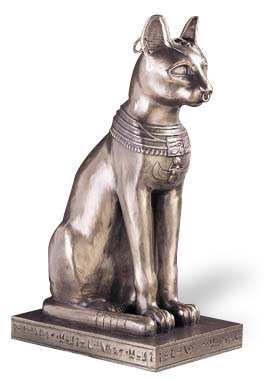 The goddess Bastet was usually represented as a woman with the head of a domesticated cat. However, up until 1000 BC she was portrayed as a lioness. Bastet was the daughter of Re, the sun god. It may have been through him that she acquired her feline characteristics. When Re destroyed his enemy Apep, he was usually depicted as a cat. As portrayed as a cat, she was connected with the moon (her son Khonsu was the god of the moon). When shown as a lioness, she is associated with sunlight.
Bastet was the goddess of fire, cats, of the home and pregnant women. According to one myth, she was the personification of the soul of Isis. She was also called the "Lady of the East". As such, her counterpart as "Lady of the West" was Sekhmet.

Bastet seemed to have two sides to her personality, docile and aggressive. Her docile and gentle side was displayed in her duties as a protector of the home, and pregnant women. Her aggressive and vicious nature was exposed in the accounts of battles in which the pharaoh was said to have slaughtered the enemy as Bastet slaughtered her victims.

Her center of worship was in Bubastis (Per-Bast, Pa-Bast, Pibeseth, Tell-Basta), in the eastern Delta. Her chief festivals were celebrated in April and May. Herodotus, the famous Greek historian, provides the following description of one of the festivals:

"When the Egyptians travel to Bubastis, they do so in this manner: men and women sail together, and in each boat there are many persons of both sexes. Some of the women shake their rattles and some of the men blow their pipes during the whole journey, while others sing and clap their hands. If they pass a town on the way, some of the women land and shout and jeer at the local women, while others dance and create a disturbance. They do this at every town on the Nile. When they arrive at Bubastis, they begin the festival with great sacrifices, and on this occasion, more wine is consumed than during the whole of the rest of the year."